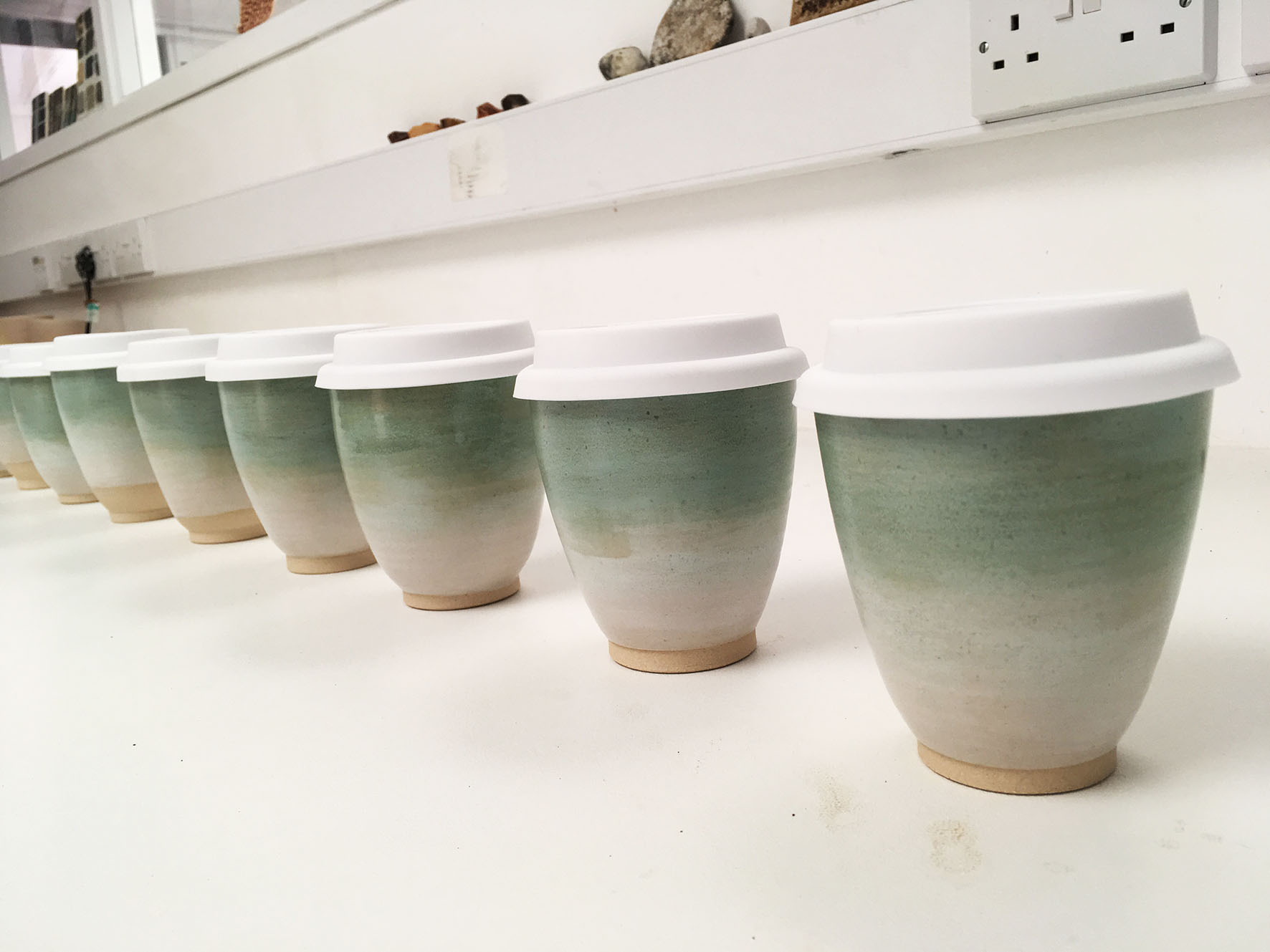 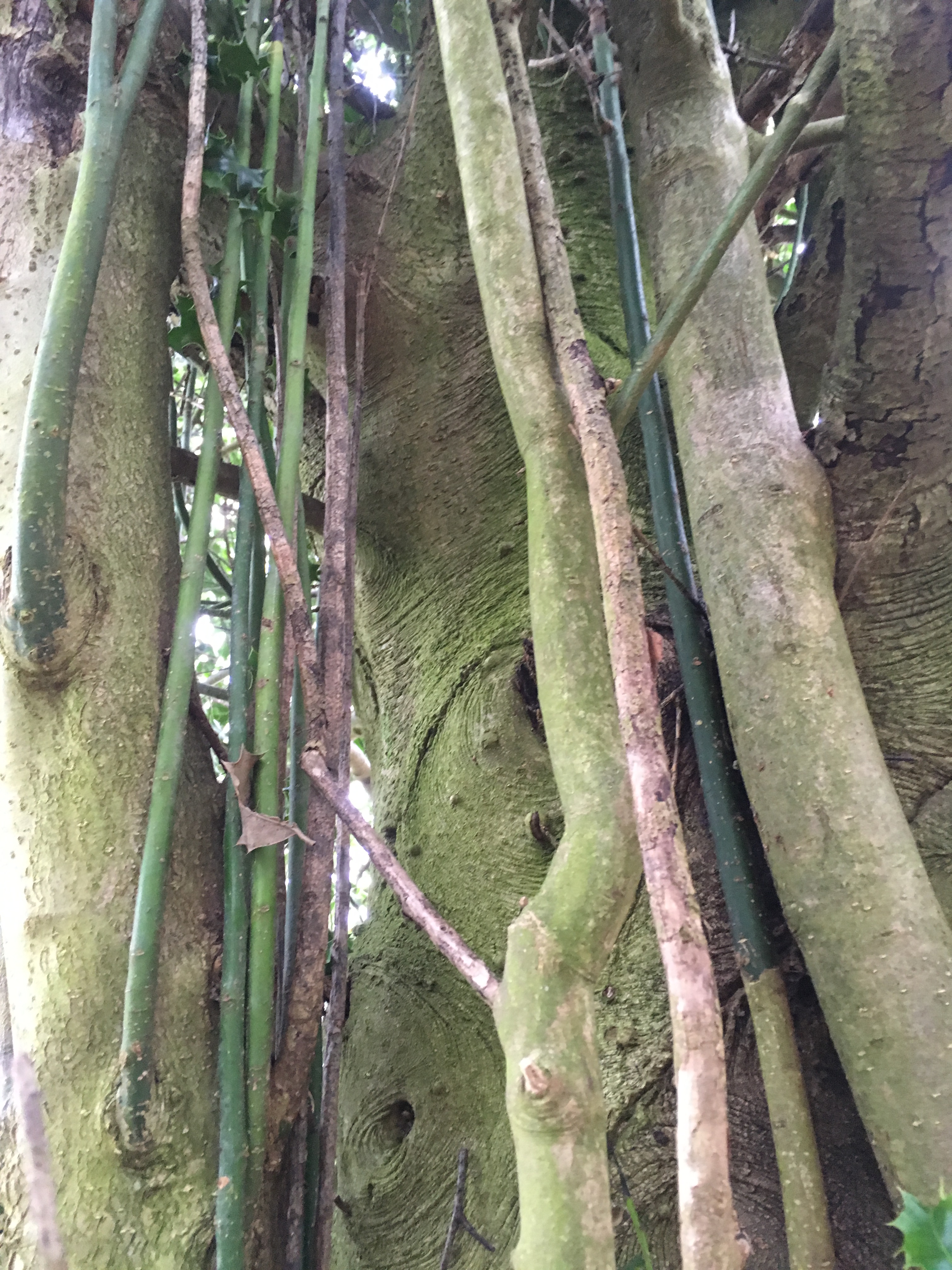 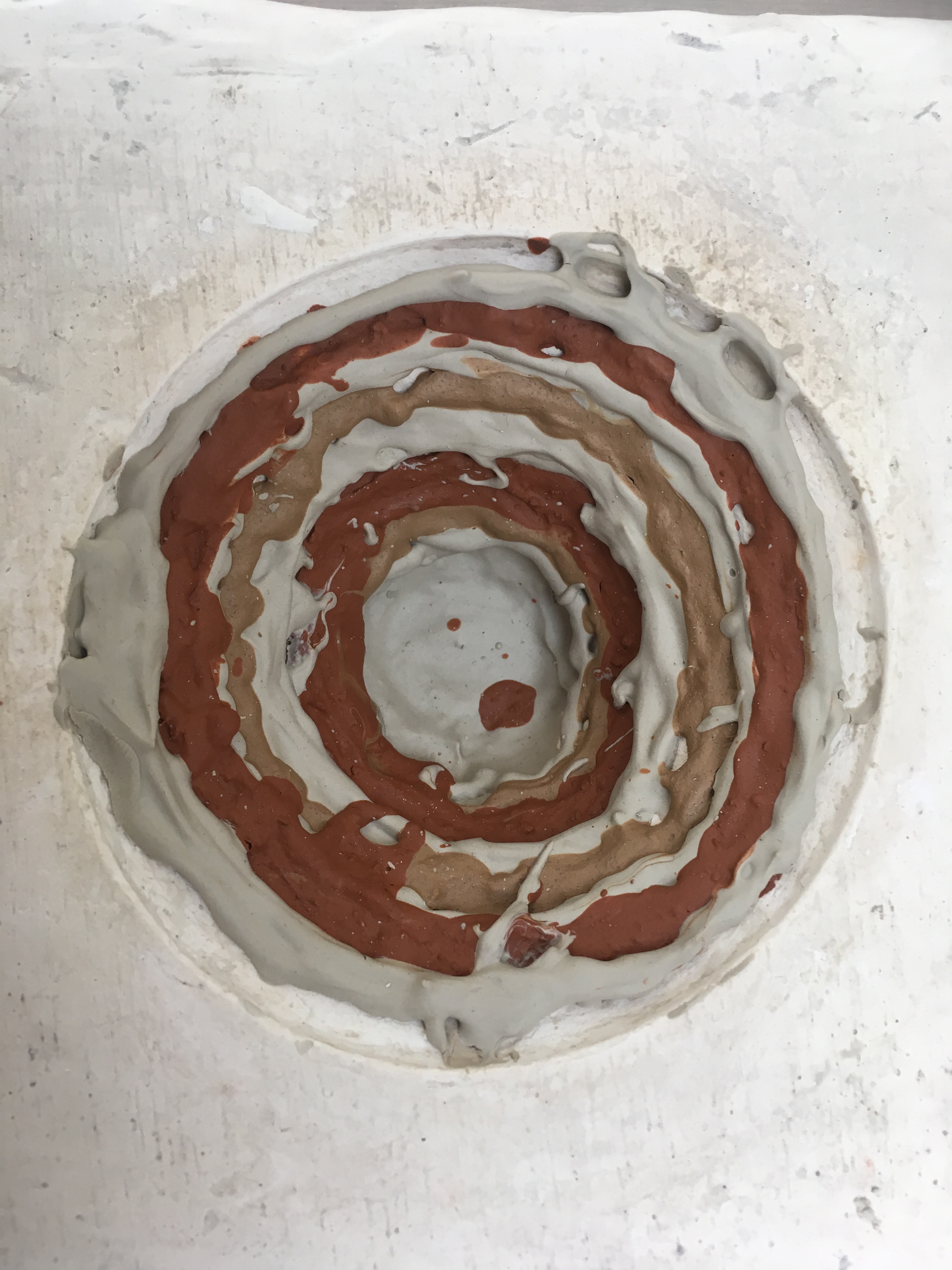 I’ve been thinking a lot about layers in the earth and the landscape and how I can express this concept in my pottery. I also want to experiment with different ways of using slip. So, I made a pot out of layers of slip! Was worth trying it out but not something I want to do again! 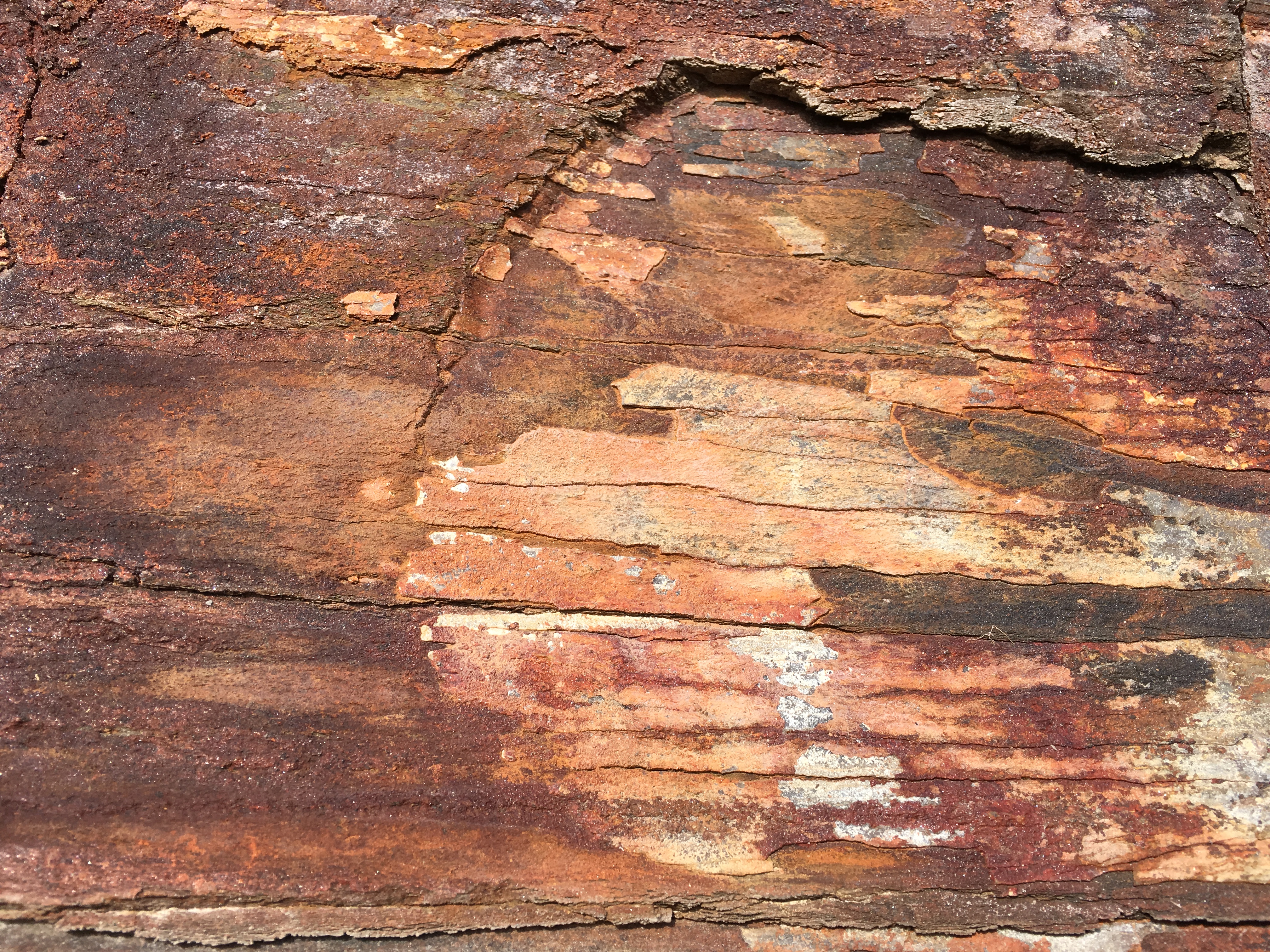 Today is grey and cold – I want to stay indoors! My daughter insists that we go to Kimmeridge so that she can use her new acrylic paints. Reluctantly I agree. I’m so glad she talked me into going, I had forgotten how amazing and truly inspiration this place is. Whilst she happily covers every item of clothing that she’s wearing in acrylics (ruined!) I race around like a lunatic excited by the forms, textures, compositions and colours in the rocks. I’m thinking about how I can use what I’m experiencing in my new pottery. I’m buzzing with ideas. The sun comes out, the grey vanishes and I go home very happy. 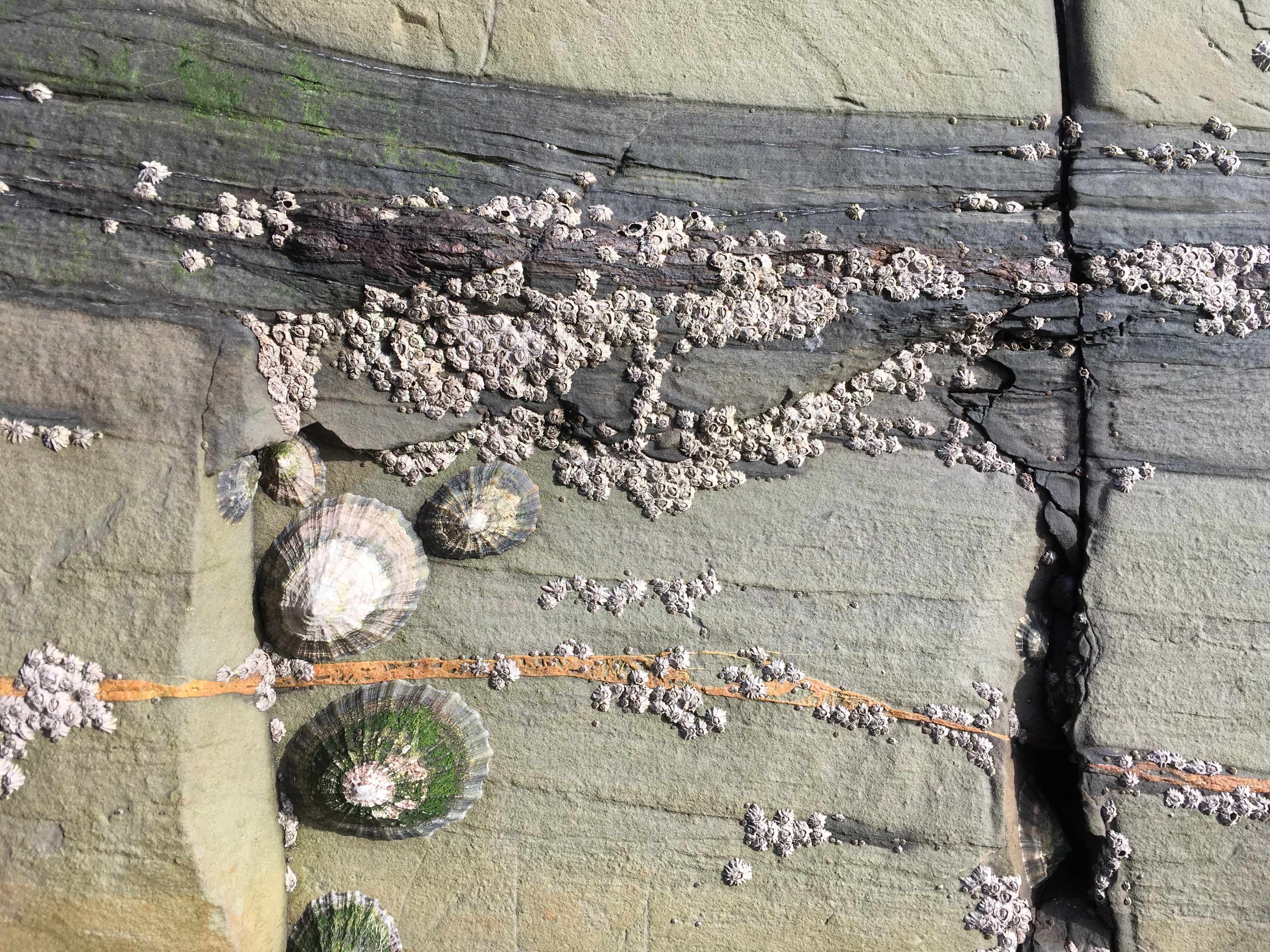 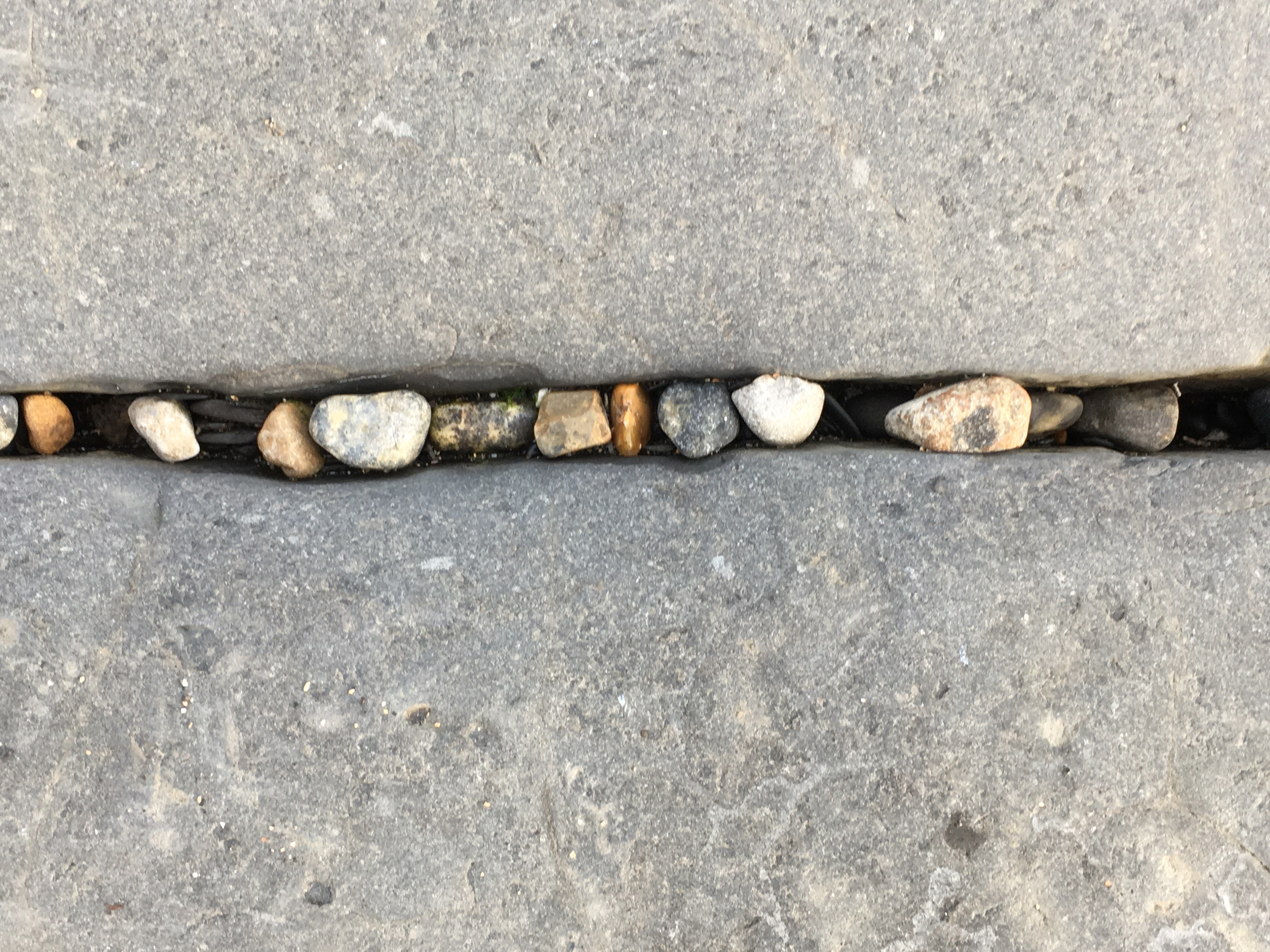 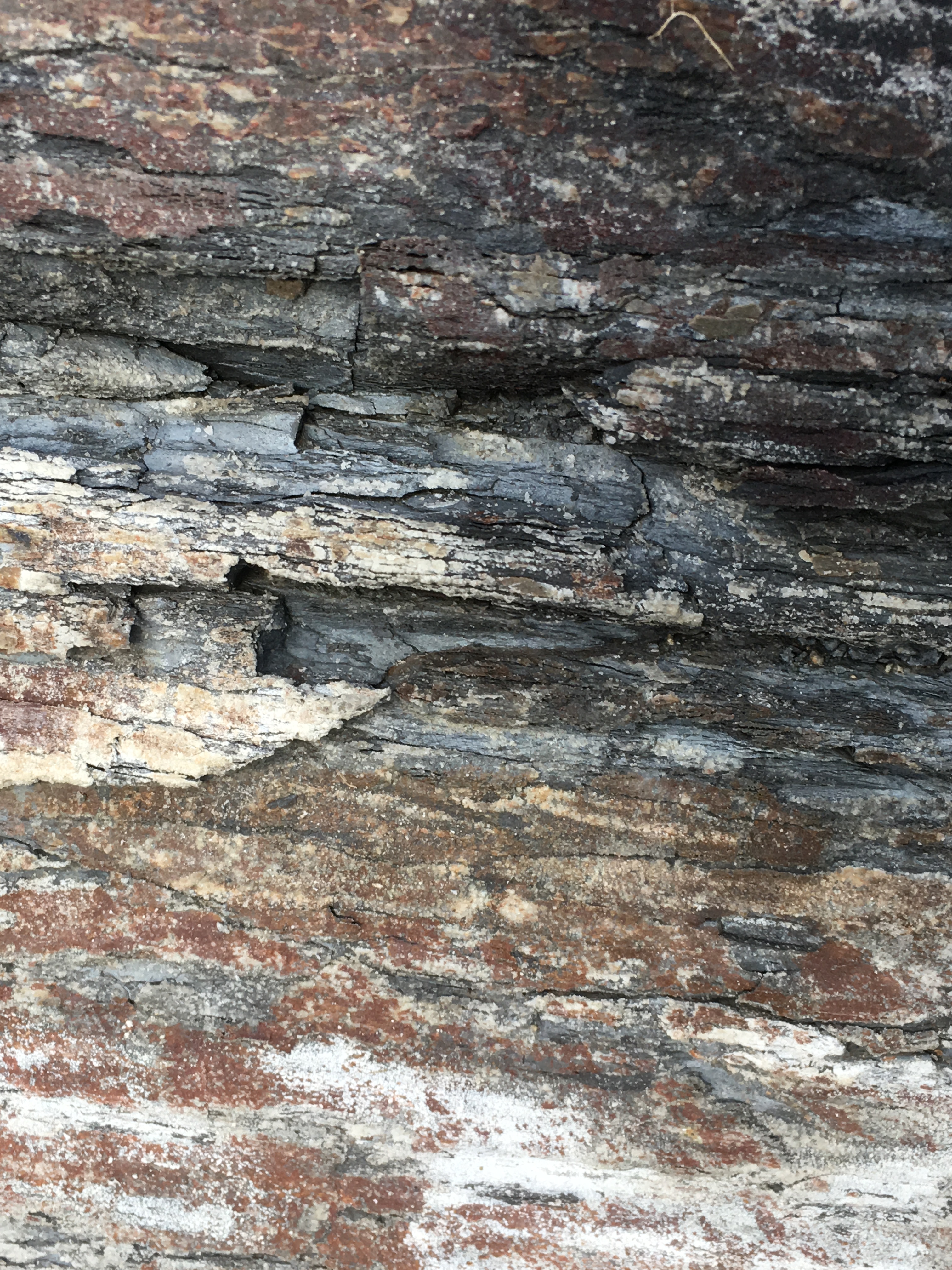 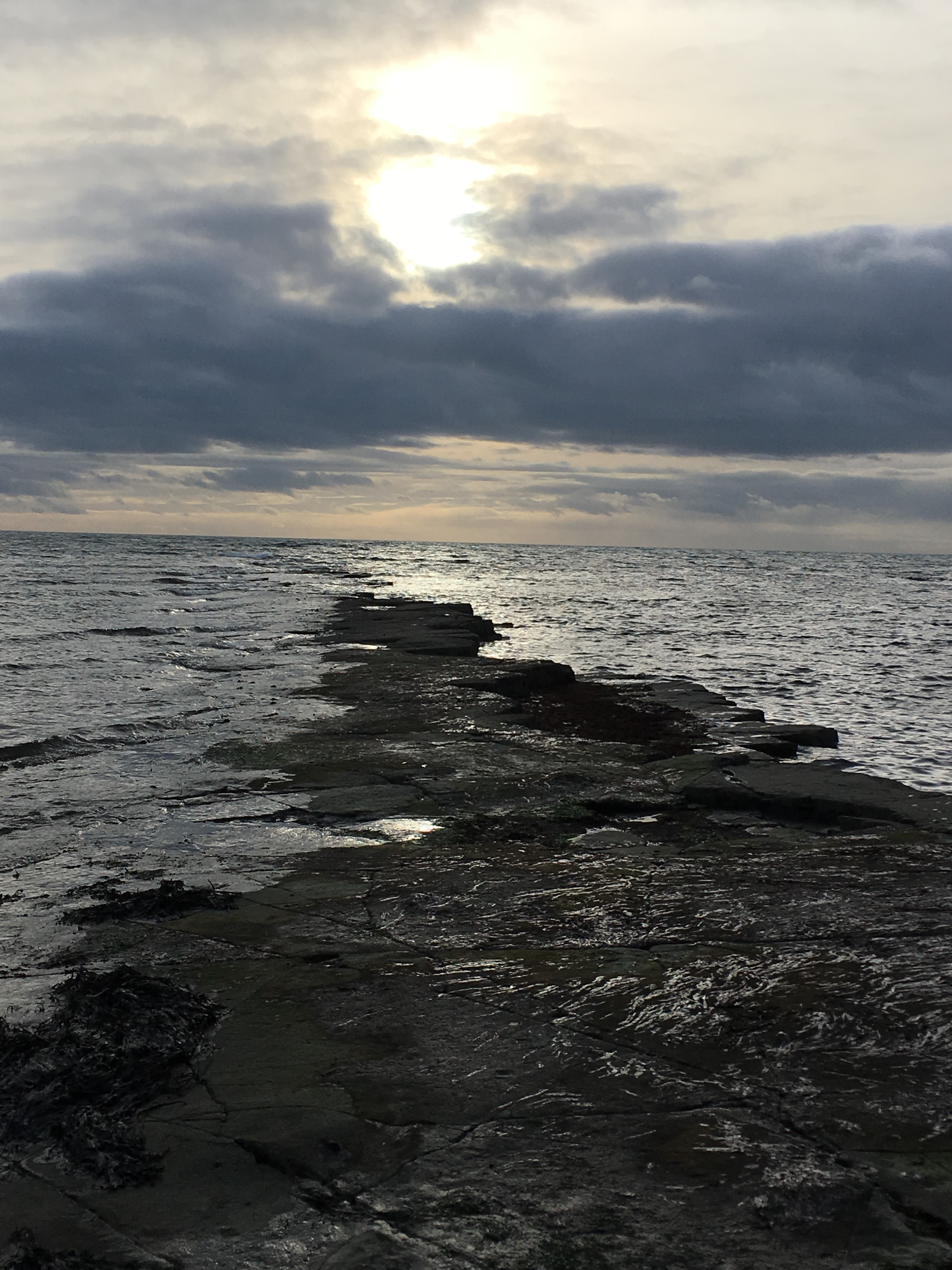 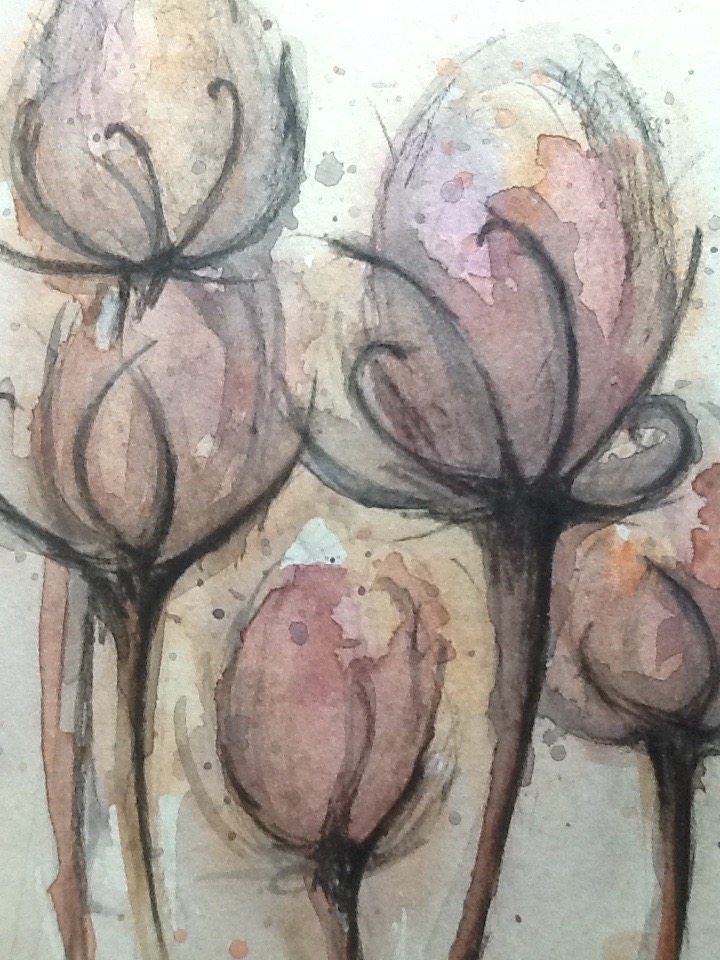 Whenever I’m out walking and see beautiful forms in the landscape I always want to recreate them in clay. Bull thistles look particularly amazing this time of year creating striking silhouettes in the sky. I keep thinking whether my new pottery should be sculptures or pots – perhaps I can do both! In the meantime, I enjoy painting a collection of thistles that I gathered, snuggled up with the warmth of the fire and a hot cup of tummuric chai. I must make sure I dip the paint brush in the right cup! 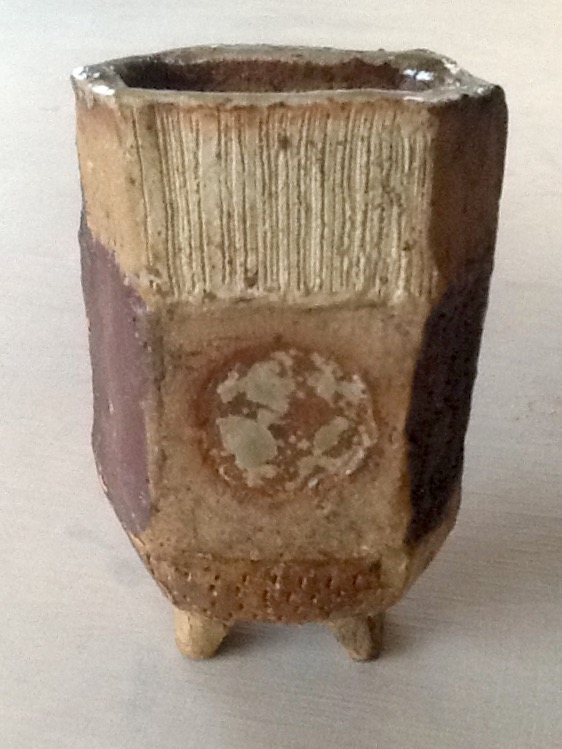 Last week I spent a couple of hours just playing! I wanted to explore working with slabs of different coloured clay. Because the clay takes so long to refine, I’m only using tiny amounts to works with. For the past few years my pottery has been quite big so I’m finding working small scale quite tricky. I’m also trying to be looser in my making technique and to not worry about symmetry which is SO difficult. Fairly happy with the result. I love the different coloured clays, the textures and the wood ash glaze. The design was inspired by some of my sketches of the landscape. The end result isn’t amazing but I enjoyed the process. 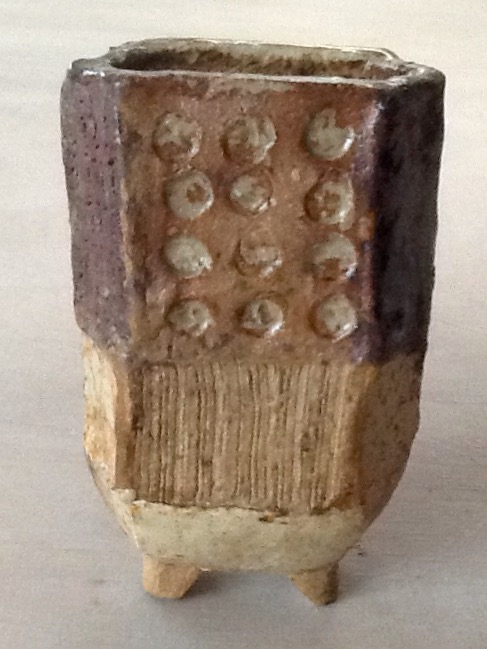 Kiln opening is often the highlight of my day… especially when glaze experiments actually work! I take my very ugly pot and plate out of the kiln and am surprisingly happy with the result of the clay slip and ash experiment. The dark red slip looks amazing next to the green wood ash. I love how the sea weed ash glaze has eaten into the clay and bubbled to create texture. Today is a good day! 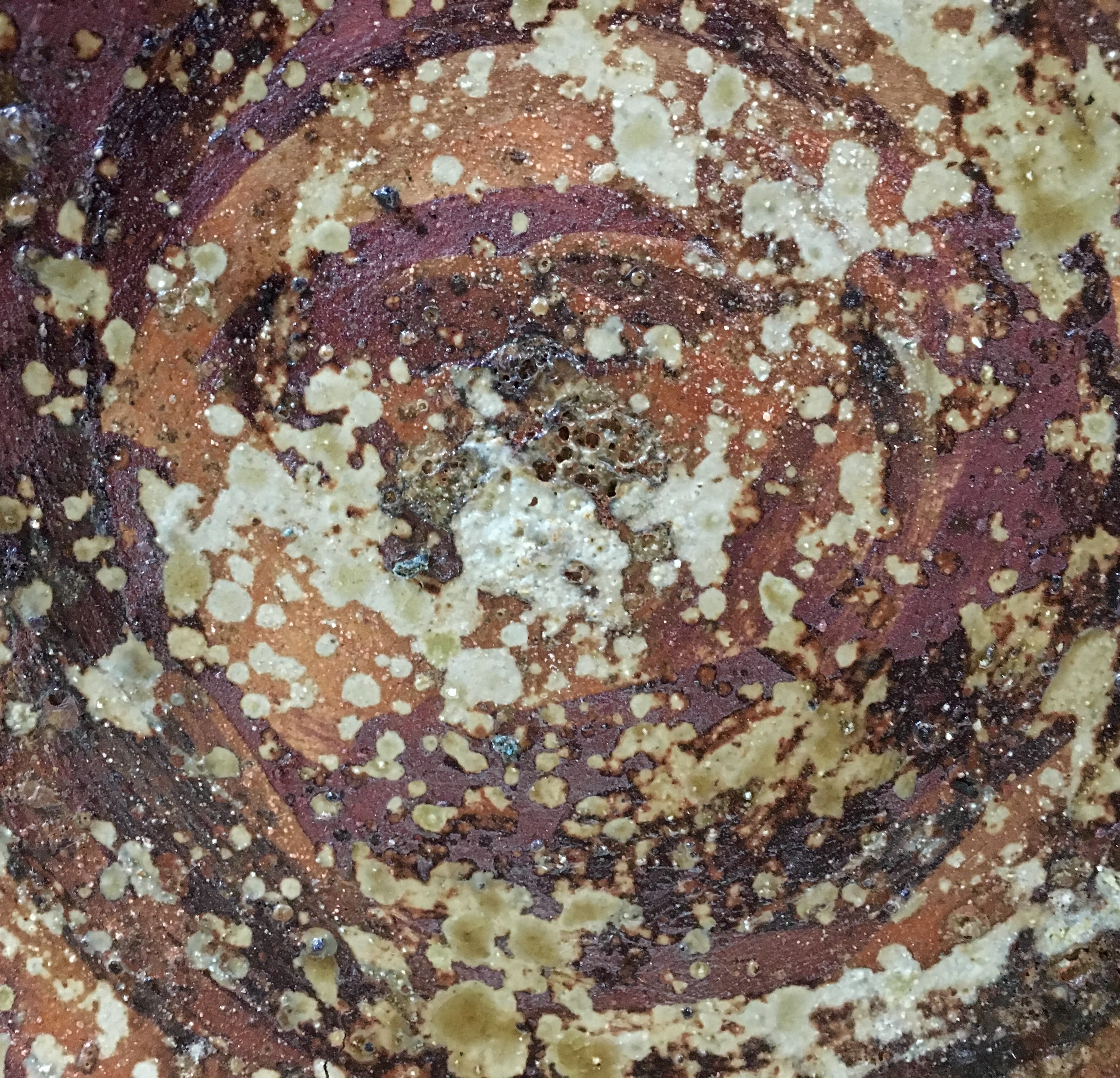 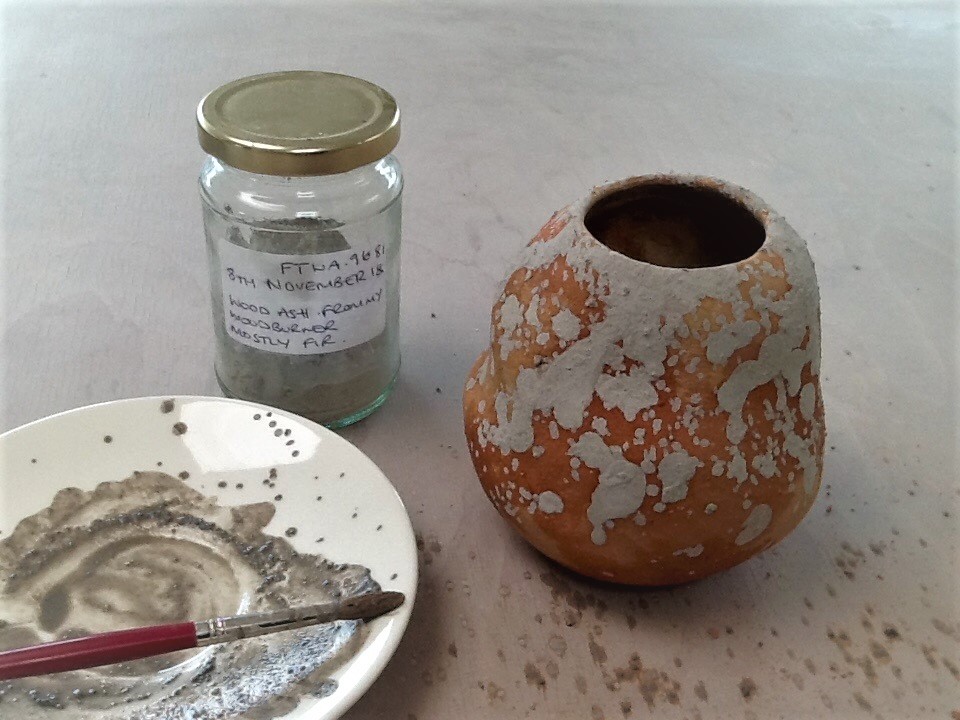 I’ve been thinking about how a slip made from my collected clay would work when brushed onto bisque fired ware – typically I only use slip on unfired clay/greenware. Using a pot I find lying around the studio (which looks like a potato), I slop on clay slips of different colours and splash some wood ash on as well. Getting carried away (!), I also pile loads of seaweed ash onto a bisque fired plate and also onto a small test bowl – I want to see if a thicker layer of ash will form a glaze. Hopefully, the results will be more interesting than the last ones, but if everything I tried worked first time I’d find pottery very boring. So, whilst experimental pottery can be frustrating, it’s also incredibly rewarding! 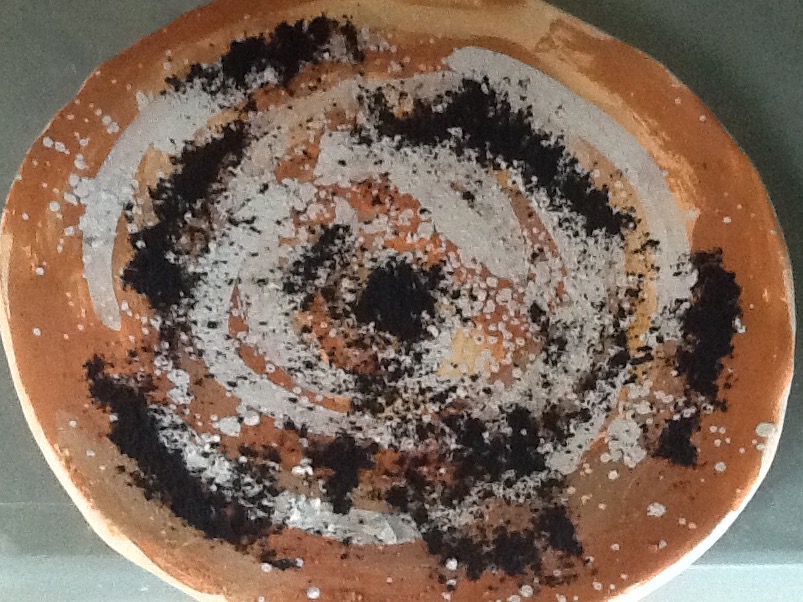 Pants! The clay couldn’t shrink evenly in the firing because of the shells and so consequently have crumbled. I seem to remember I should have low fired the shells first to calcify them? Oops! Also, there’s no trace of the seaweed that I put on the test bowls. For a moment I feel like giving up. But actually, the first ‘not quite totally broken’ test tile is actually quite an interesting texture which might be usable. It reminds me of the land next to where my uncle lived. In the summer, the land became totally cracked and broken. As a young child, I remember wondering why it looked like that – it was totally puzzling and very mysterious! I know now that it was dry clay, but at the time I thought it looked like a planet from Dr Who! And the seaweed glaze, well… I’ll do it again but with more ash. I AM NOT GIVING UP!! 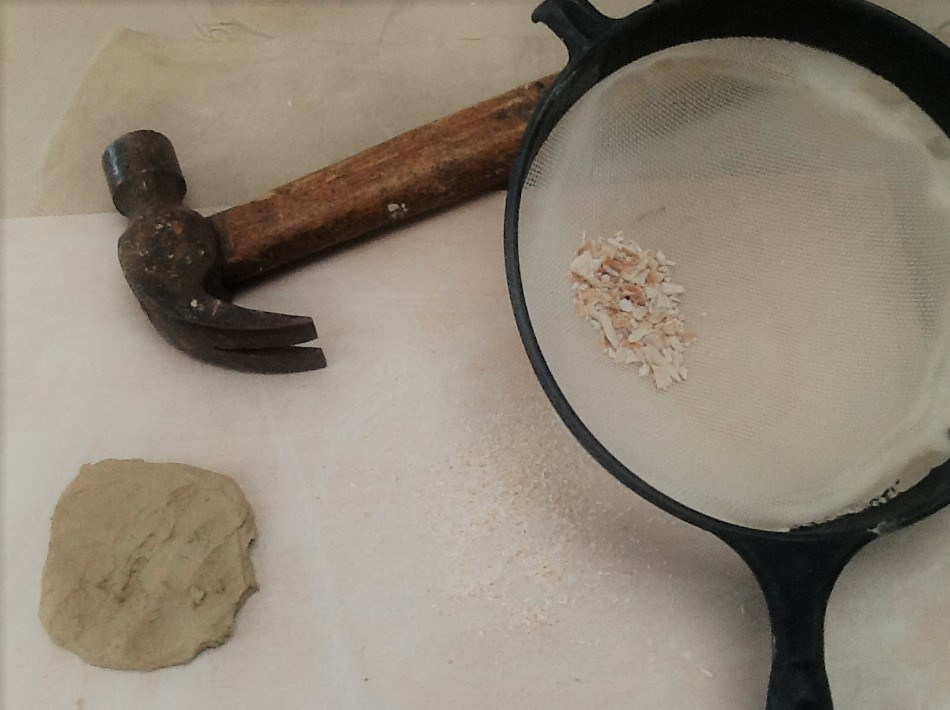 Another day of indulgence… I haven’t let myself go creatively for such a long time, it feels really good! Whilst having fun with pastels, I start thinking about an archaeology book I read over the Xmas break. It talked about how in this area, crushed shell was used as a temper in clay and I decide I’d like to give it a go. I have some shells lying around the studio so start crushing them to a powder using a hammer. I add the shell to the clay in variable amounts to see if the size of the shell makes a difference to the final result (I have absolutely no idea what I’m doing!). I also decide to burn the stinky dried sea weed that I gathered last year – easier said than done – it’s impossible to ignite with a lighter. I resort to using a blow torch to form the ash which I crush into a fine powder and apply to some test bowls. Blimey, what a productive day! 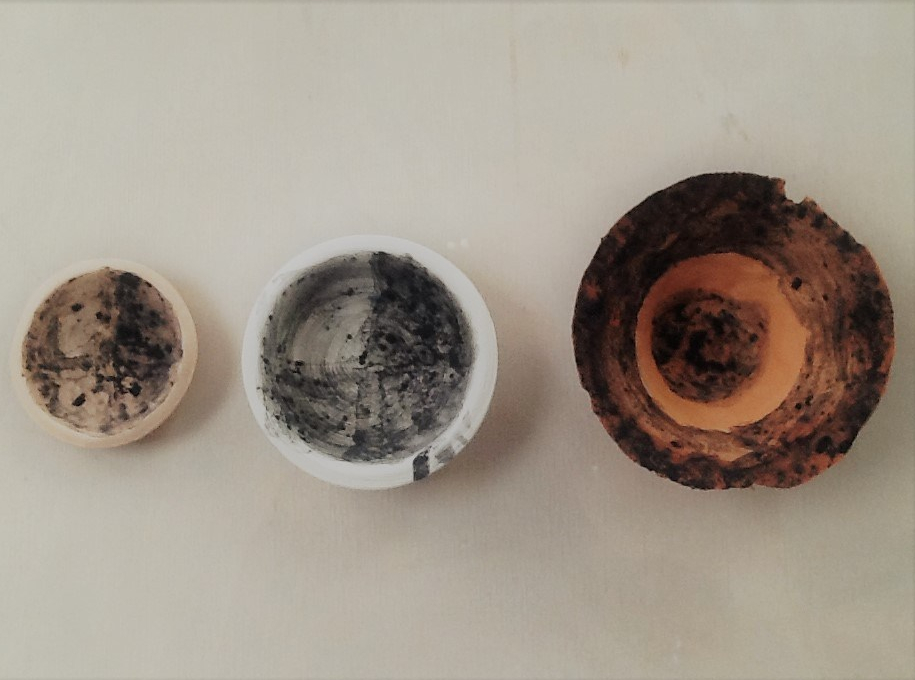