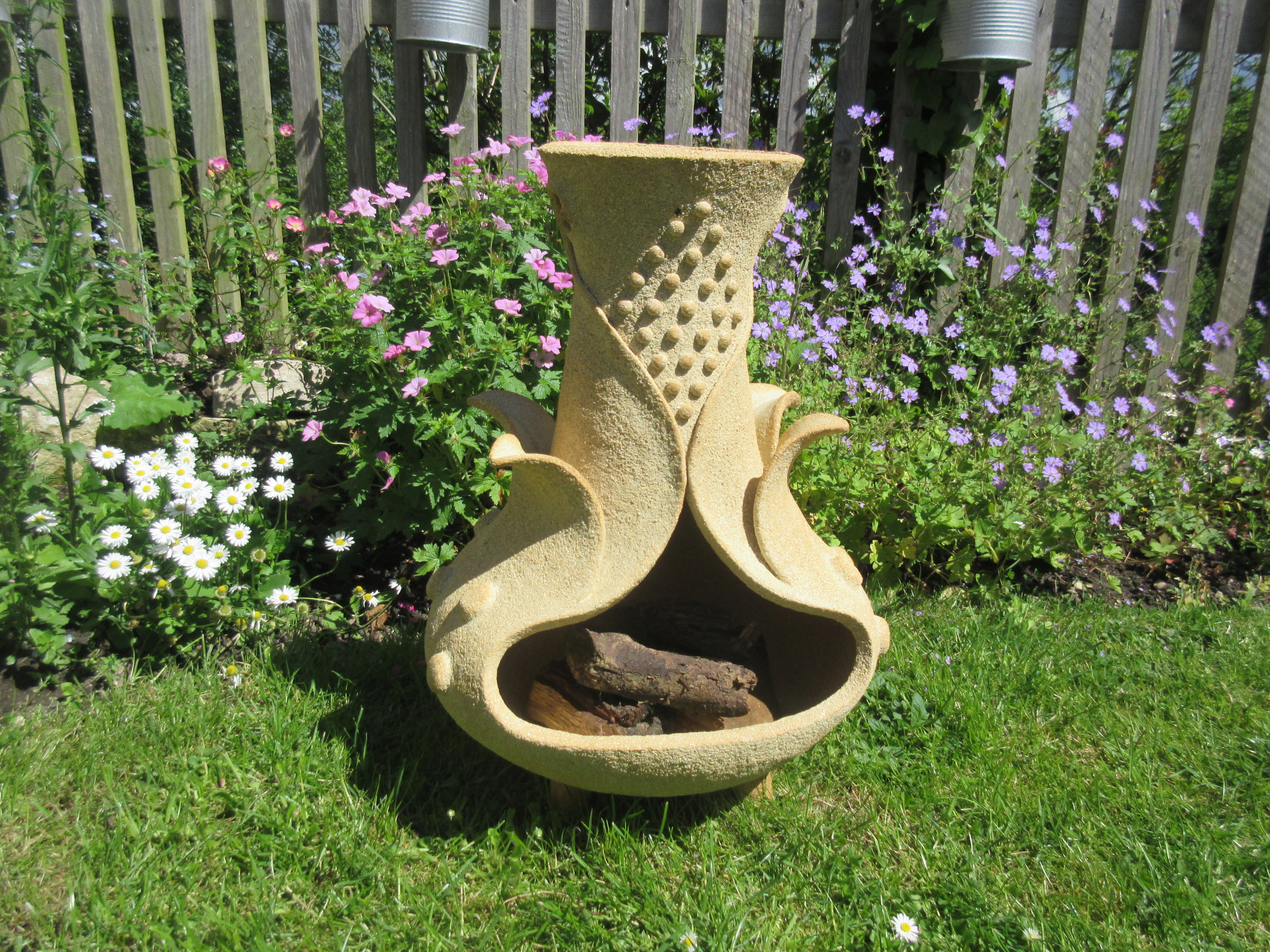 I absolutely loved making this chiminea and was really happy with the result. It’s been a while since I’ve made anything functional! I  feel very happy that it’s gone to a good home – it now belongs to an amazing lady and is sat in a beautifully tranquil garden alongside woodland. Perfect! 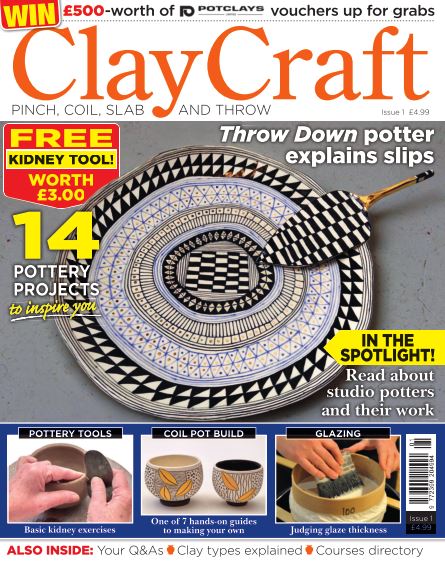 Whether you are a professional or hobby potter, Clay Craft magazine has loads of really good information and project ideas. I get the magazine and use it as a teaching aid as well as learning loads from it too… and then yesterday, I received an email to say the editor of Clay Craft wants to run a feature on me! After quite a lot of whooping (!!) I then started to panic about all the things I need to do to the studio to make it look amazing and of course – what should I wear for the photo shoot!! Needless to say, I am very, very excited! 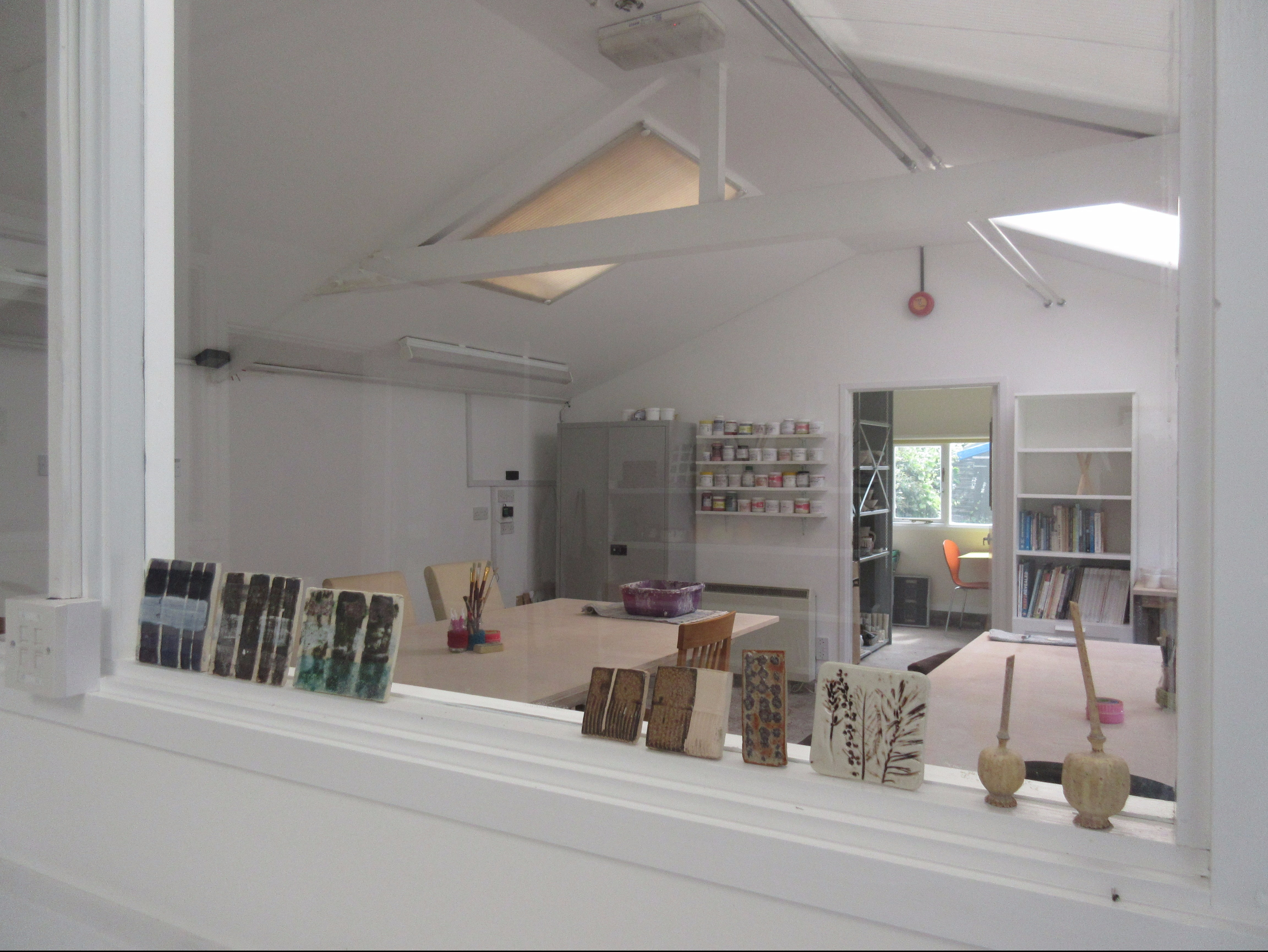 Like most artists, I’ve had to endure creating in places less than ideal! And so after years of working in small, dark, cold spaces, I’m really enjoying working in my amazing new studio. It’s light, spacious, warm and dry… perfect!! To coincide with moving into my new premises, I’ll also begin working on a new collection of ceramics… watch this space!!

I was feeling excited to start something new this morning, but when I opened the studio door I was disappointed to find the head had dropped off my ammonite. Aarghhh!! Although it wasn’t a total surprise – when I was joining the head to the shell I was concerned how dry the shell had got, but thought it’d be ok… It obviously wasn’t!! After a very deep breath I sat down and started the rebuild. I have limited time in the studio so was annoyed to be re-doing something I should have done properly in the first place. I won’t make that mistake again!! Luckily though, I fixed it and it looks better than it did before. Phew! #pottery #ammonite #disaster

This fish was the first I’d ever made and began life as a vase! About half way through the making process I realised that making a vase was dull and not at all what I really wanted to be doing. I turned in around and upside down and then saw that it had good potential to become a fish. I then totally immersed myself in creating a horned fish inspired by those that swam our seas during the Jurassic period.

I enjoyed making the fish so much I went on to make to 2 more, very different from this one but equally as much fun!

In a former life I was a very bored graphic designer! In my spare time and to feed my creative self, I’d go to local galleries and craft centres to look at all the beautiful things other people had made. There were 2 places I’d visit the most… The Boilerhouse Gallery and Walford Mill Craft Centre.

I wished that I was some kind of artist or maker able to make lovely things and sell them instead of spending most of my time moving type and pictures around on a computer screen! So, as I had a friend who was a potter and seemed pretty content, I decided to give pottery a go and began a short course in Ceramics. I was totally addicted! I made every mistake possible but learnt a lot from my mistakes. Soon I was selling my ware at local craft events and in a couple of gift shops.

7 years later, The Boilerhouse Gallery asked if I’d like to join the co-operative. I was so excited (but tried to sound very cool which is something I’m totally rubbish at!). Now, every time I go to the gallery, I remind myself that this is what I dreamt of and to be thankful (even when it’s minus temperatures because we have no heating!).

Today, 10 years later, I’ve been asked to put some of my sculptures in Walford Mill Craft Centre. I feel that this is a massive compliment to my work, as they are extremely selective about who’s work they sell. I know it’s small scale compared to exhibiting somewhere like the Contemporary Ceramics Centre in London, BUT it is a BIG step in the right direction!

It’s taken a long time, but not bad considering I’ve had 2 children along the way! My thought now is ‘where to next’!?

Today I was ‘manning ship’ at the Boilerhouse Gallery (an artists co-operative that I’m extremely lucky to be a part of). Whilst there, I decided to make good use of my time and do some work on a commission for an ammonite. People who visit the gallery love to see the artists at work.

The piece I’m working on is for a lovely man with a keen interest in paleontology and who has purchased several of my sculptures. I’m very keen to give him something that he’ll love!

I was at the gallery for 4 hours. Apart from my time dealing with customers, most of this time was spent making adjustments to the shell to get it to balance! It didn’t help that as it was a beautifully sunny day, the clay was drying quicker than I could build. Finally though, I triumphed and felt a major sense of achievement when it finally stood without toppling over!

It’s not often I get attached to things I make, but I’m feeling slightly sad to see this piece go! I really enjoyed the technical challenge of making the ‘shell’. It took quite a lot of attempts to get the proportions of the spiral correct and I had to work with the clay when it was quite hard so the shell didn’t collapse (as it’s totally hollow and made from lots of coils). It was also quite difficult attaching the ‘tendrils’ so they remained vertical and didn’t flop. I hope the new owner enjoys looking at it as much as I enjoyed making it! 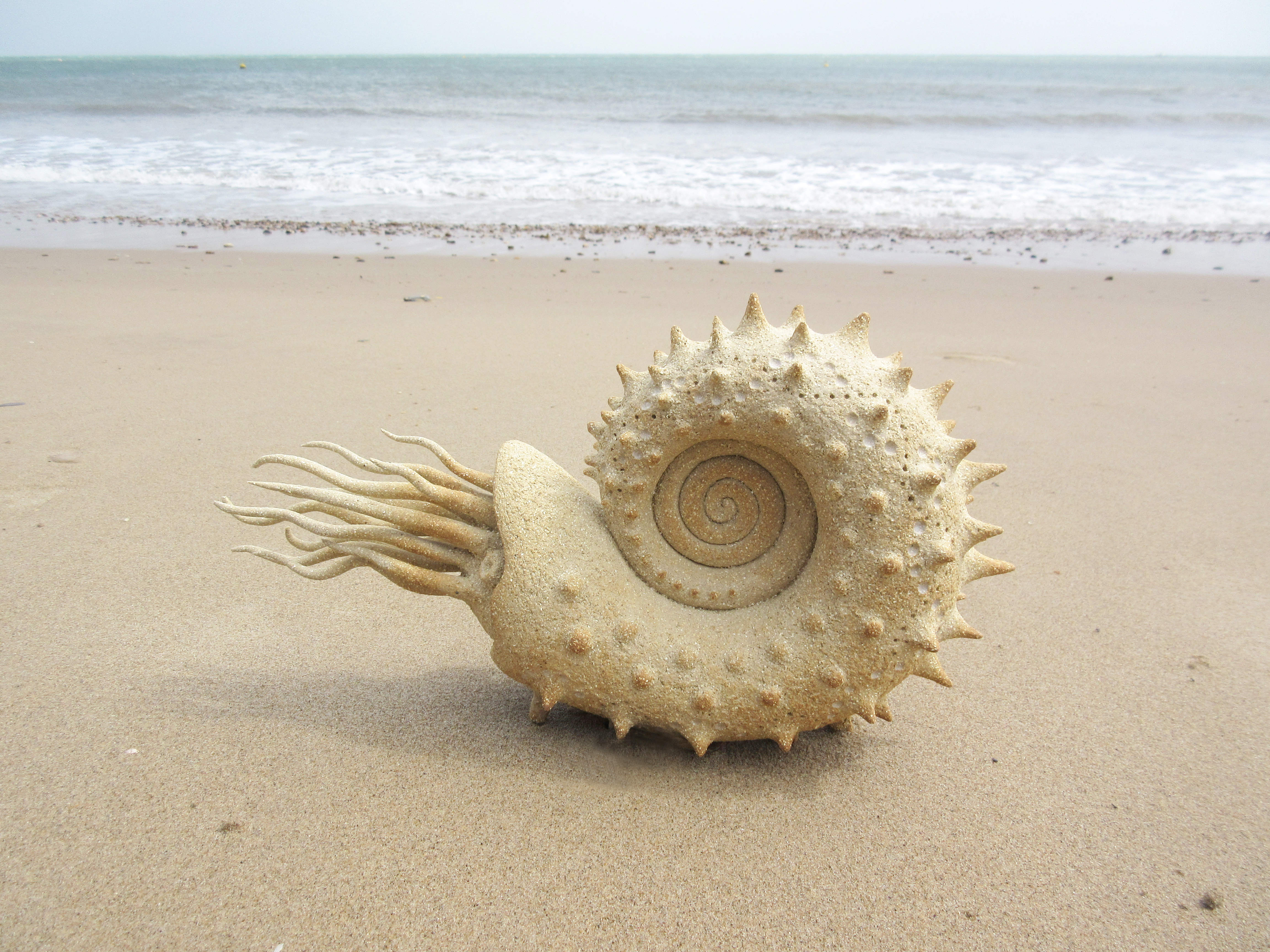 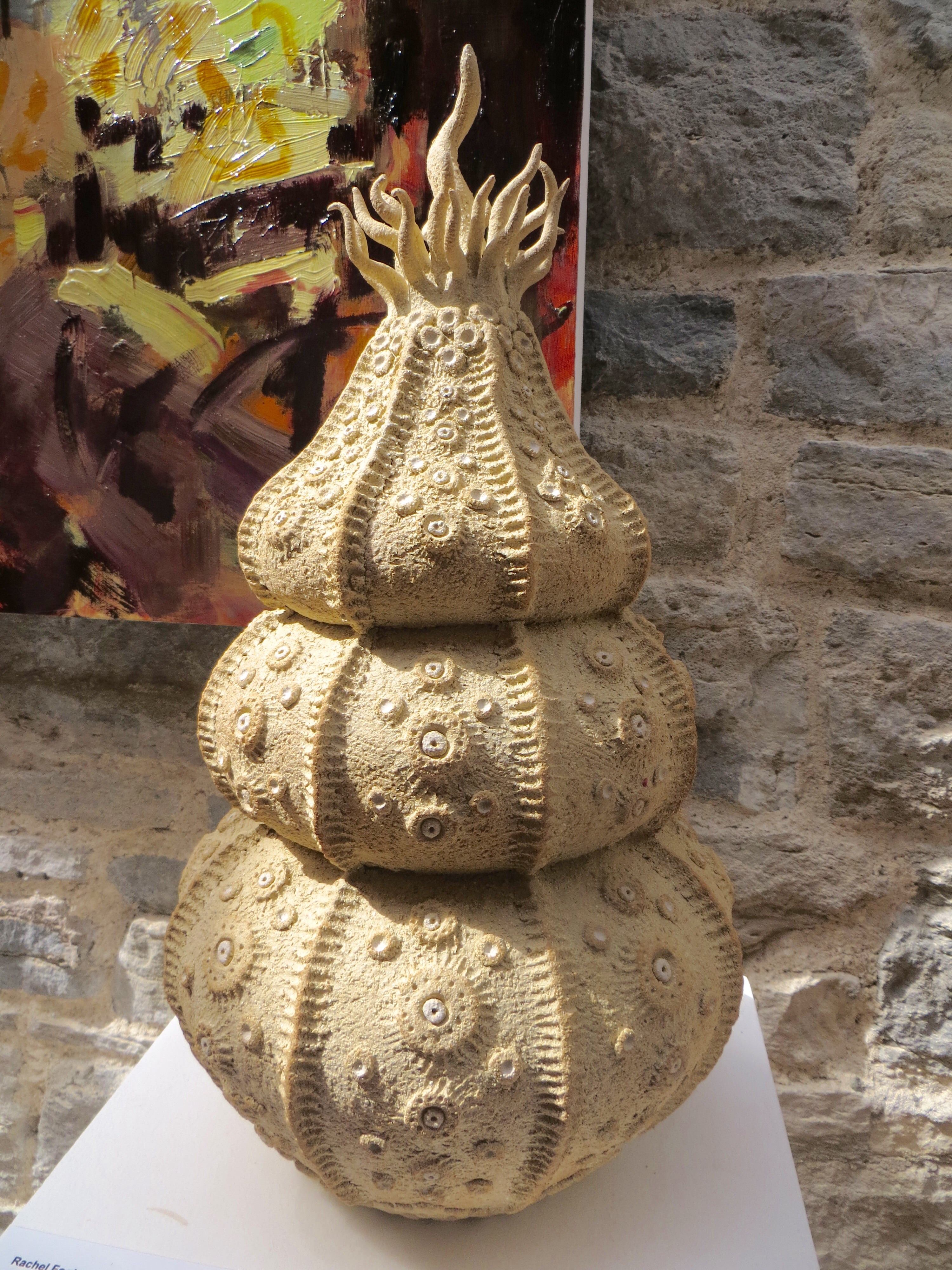 Today, whilst stewarding at Durlston Country Park Gallery (an amazing exhibition space perched close to a cliff edge near Swanage) an elderly lady who was blind enjoyed holding one of my larger sculptures (photo above). She spent a long time running her fingers over the surface, feeling the different shapes and textures. I felt so pleased that the sculpture could be enjoyed by someone for it’s tactile quality and not just the aesthetic. This was a very proud and emotional moment for me.

Phew! It seems people actually like my new work… I’ve had so much positive feedback from people, it’s been quite overwhelming. We’re just 4 days into Purbeck Art Weeks and I’ve sold several pieces, which I’m really happy about. More importantly though, people are interested… They want to know how I’ve made the sculptures, sources of inspiration, what clay I’ve used and quite a few people have even asked if the they’ve been carved out of stone! I couldn’t have wished for a better response.